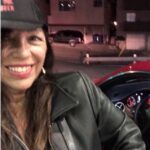 Donna Balancia is the producer of East Coast Rocker and US Rocker.

Gannett Co. gave Donna Balancia the chance to cover the music scene in New York City, where she interviewed musicians ranging from The Grateful Dead and The Ramones, to Blondie, Bob Weir, Todd Rundgren and Utopia, and The Clash, in addition to many others.

Since then, Donna Balancia has worked as a content editor for a range of companies with a focus on entertainment, technology and business.

Tracy is a NYC-based photographer who covers music and entertainment events.

Bailey is a music writer, publicist and promoter who lives in New York City.

John is a true music fan and die-hard.  He loves to go to shows and has a wealth of knowledge when it comes to music reviews.

James Balboni is a prominent photojournalist who covers a range of beats on the East Coast and on the West Coast. In addition to rock and roll, James is a fan of technology and aviation.

Rich Hoynes is an author and entrepreneur with a remarkable business pedigree.  His Great Jersey Musicians, is a must-have coffee table book.

Dottie has a love for music and loves to go to the shows. She has a special knowledge of deals and entertainment law, having covered legal issues and law-related stories for various media outlets.

East Coast Rocker is not related to the New Jersey-based print publication that went out of business in 1992.